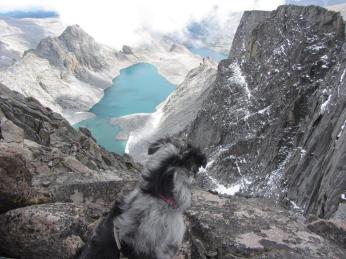 Me and Supergirl in Cloud Peak Wilderness, WY.

One day as I was driving home from class, I had this thought…

Actually, before I go on, I should add some context.  When you’re in grad school for a counseling program, particularly at Naropa, you usually leave class in one of two ways: 1) completely confused, befuddled, questioning the world and everything you thought you knew or 2) completely ecstatic, vibrant, and ready to go out and “transform the world” as we Naropians say.

On this particular sunny Boulder day at the end of February, I was headed home from my Counseling and Human Relationships (HR) class.  HR was one of my favorite classes that always reminded me how lucky I was to be in a program where my job one day would be to go on personal journeys with others, hopefully help them see their own strength and beauty, and probably grow with them along the way.  And so, it was in this state of bliss, stopped at a red light in my silver 2002 Subaru (aka “Surry the Subaru”, short for “Surrender”) listening to my favorite modern rock station, when the thought popped into my mind:  “If I just had a man in my life right now, I’d be on Cloud Nine.”

Instantly I rejected the statement.  While the words never left my lips, the thought still left a bitter taste on my tongue.

Inherently I already knew the truth.  I knew that self-love had to come first, at least in my case, before I could ever let a man in.  I knew that the love for and from my family, close friends, Supergirl, and myself was really all that I needed to be happy.

By this time, I had been single for months.  In December, I had briefly dated a guy from my school who, while a good guy, was totally wrong for me.  His idea of attaining enlightenment was to go to an Ayahuasca ceremony while mine was to grab my dog and venture as far out into Mother Nature as possible.  I also think Pacer would have bit his head off.  But in the end, I think we both needed a sexual release and it was nice to briefly feel wanted.  Before that was my love and self-destruct relationship that I was still healing from. That’s where I learned that it was nearly impossible to ask someone to love me when I could not yet love myself.  And I was now on a path that was teaching me self-love, with Pacer as my guide, showing me what unconditional love truly meant .

So, when this thought popped into my mind, I realized I still needed a mental shift.  I was content with my life, but I wanted happiness.  I wanted to get there myself, with only Pacer by my side.  Actually, that’s not completely true…by this time in my schooling, I had learned that some healing can only occur in relationship with others.  I knew my cohort/family as well as my sister, friends, and blood family would be part of my path to reaching my own cloud nine.  Still, the power to get there was under my control.  (“Then, maybe then:” I thought, “I could allow a boy in my life.” This statement would later come back to me for another lesson, and a part two of this blog.)

The attainment of this goal, the goal to reach my own Cloud Nine, easily carved out my trail for the next few months as I sought love and joy in my own life.  As usual, it was this simple perception shift that made the biggest difference.

A week before, I had spent my Saturday evening with Pacer, dressed in sweats and watching Netflix.  I felt lonely, wanting.  The next Saturday, after my perception shift, I made the choice to stay in my sweats all afternoon and once again watch Netflix (and found a much better movie) with Pacer in the evening.  This time, I felt at peace.

I also spent time (amongst burying myself in transpersonal readings and papers for school) cooking warm, nutritional meals for myself, having family dinners with Sandi and Sage, going on snowshoe trips with Pacer, cheering on Sandi at a half marathon in Salida, and even going out a few times in the evening with friends (as someone on the extreme side of introversion, this was a big step).

Finally, I had one important conversation with my therapist.  She asked if I felt like I was part of the world and connected to my peers.  After some thought, I said I had connections, but no one I was super close to.  I felt a bit out of place in the busy world around me.  In my head, this implied that something was wrong with me.  Of course, my brilliant and wise therapist said to me with enthusiasm and certainty that I could not argue with that my connection was with the Earth and my dog (knowing that I still loved and deeply cared for all people).  There was no judgement in her statement or indication that something was wrong with this.  To her it was beautiful, it was perfect.

I finally realized that I was enough.  Yes, I may be a little messed up, but in whole and amazing sort of way.

By May, I realized I had reached my Cloud Nine.  Pacer and I just moved into a new place.  She slept on the pillow by my side, we had a summer planned full of mountains and adventures, and despite initially dreading it. I was enjoying my 10-day Wilderness First Responder course even though it required almost constant interaction with others.

Of course, that’s when I met a boy.  Actually, I met 2 boys, but that’s another blog…